The group meets in members’ homes on the third Monday of the month at 7.30.  Please contact Mark Barley if you wish to join the group.

Fred Owen led the Knutsford U3A Geology group for more than 4 years and his enthusiasm is infectious. He has shown us his photographs of amazing geological features from all over the world.

In south-east Africa the 6,000km long Great Rift Valley is opening as land drops down between two huge splits in the Earth’s surface. In Europe the Alps grew as land masses were forced together, and volcanoes were created by the heat this generated. Now the Alpine valleys contain giant slow-moving glaciers that melt from the inside to produce amazing but hazardous ice-caves. The land we live on is moving!

Having heard the story we are keen to see the evidence, so our Ercall coach left Knutsford Bus Station at 8.30am with twenty proto-geologists on board. After a comfort break in Wellington we finally parked at one end of ‘The Wrekin’, an extraordinary hill shaped like an upturned long-boat sitting in the middle of a wide flat plain.

Wearing walking boots we went round the corner to the SSSI-protected Ercall Quarries, where small trees and wild flowers fail to hide the huge rock faces. We studied pieces of loose rock lying around us. Some were white, some reddish brown, some more yellow, but all are mottled or striated with other colours. Grown men and ladies threw dignity to the wind as we scrambled up the loose scree to a flat grey rock face standing at 65 degrees to the horizontal. It carries the imprint of a beach after the tide has gone out! There are ripple marks, patches of gravel, and flow channels from draining water! The rock surface has been dated to be 540 million years old, a time when Ercall was 60 degrees south of the Equator. How had it got to that angle?

With our ‘Inspector Clouseau’ magnifying lenses we searched for evidence. The large-grained multi-coloured stones were apparently from a volcanic intrusion of hot, molten rock from below the sea bed. The large grains and varying colours suggested that it had moved and cooled relatively slowly. By comparison, the sea-bed layers were grey and fine grained. Closer inspection showed long cracks behind the tilted sea bed where the slow-moving volcanic rock had intruded and slowly lifted it to its current angle.

We sit in the sun among the flowers and eat sandwiches. Later we have free time and most of us walk to the top of the Wrekin but some spend longer in the halfway café!

On the way back we stop for our pre-booked evening meal. It is excellent. We chat happily and thank Fred for his tremendous efforts in organising and leading the expedition. It had been yet another amazing day. 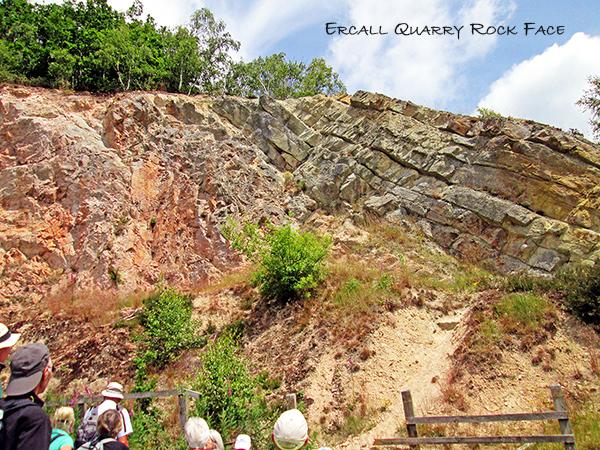 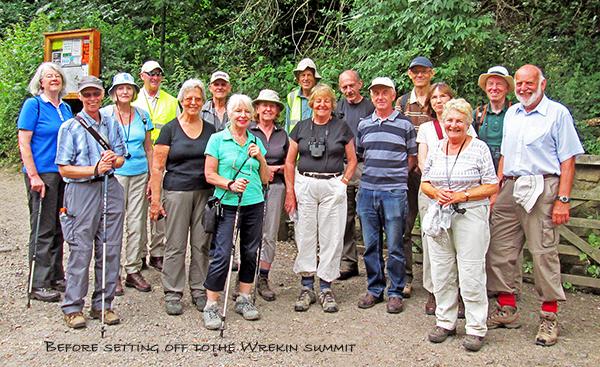 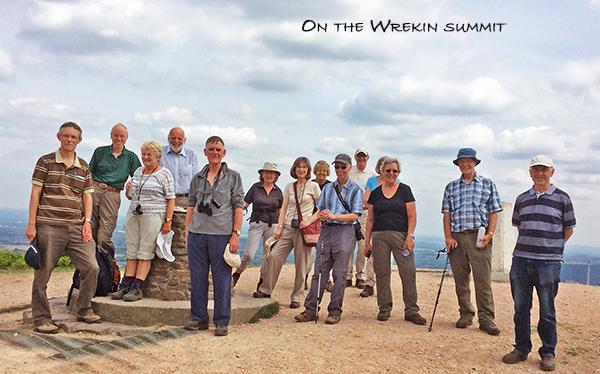